“Make a Legal U-Turn, If Possible.” 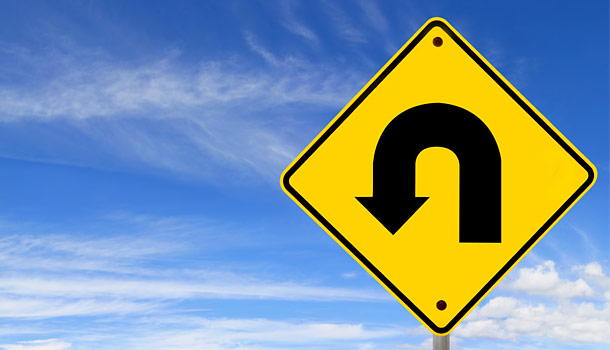 2015 was rough. While I still functioned reasonably well , it entailed a lot of smoke and quite a few mirrors. Even if we’re grieving over a loved one, Standard RL.2.1 still needs to be taught. And regardless of our backlog of essays, Common Assessment #2 still needs to be administered, collected, and assessed. As a result, I spent much of the past year stapling “lost” signs onto poles while canvasing the neighborhood for my sanity.

And then I stumbled onto the Taoist adage, “If you do not change direction, you may end up where you are heading.” Gulp.  After a year with one unpredictable GPS, I kind of wanted to go home.

Please don’t misunderstand: My heart still quickens when the classroom door latches behind me, and few things excite me more than watching my students escape into their choice reading before the bell even rings. However, the you’ll-never-catch-up-even-using-all-three-personal-days-for-grading pit in my stomach has grown exponentially over the last few years.  And it is taking its toll.

Accordingly, so that I don’t end up where I’m headed, I’ve resolved to shift my focus for the rest of the year. I can’t change most of my stressors, so I’ll concentrate on what I can change. Below are five U-turns to which I am committing in the coming year.

I still love my job; I just don’t like the effect it has had on me as of late. So, in an effort to not end up where I am heading, I resolve to make a legal U-turn. I want to stay fresh for, remain committed to, and be focused on the 125 students who just might become lifelong learners (and readers!) because of what I accomplish in the classroom. They also might not.

Category: Beyond the Books, Featured, Uncategorized

← ‘Twas the Night Before Progress Reports
The “Real-World” Midyear (& Final) →

The library in 1227 got a makeover: 2 new-to-us shelves (Thanks, FB Marketplace!), 4 brand new sections (Thanks, 2021!), 20+ new signs (Thanks, @annahughes33 !), & lots o’ new titles (Thanks, Student Wish Lists!) We’re doing our best to ensure that every reader sees themselves within these shelves. 📚❤️ #booklove #weneeddiversebooks #WPScommUNITY
My Tweets